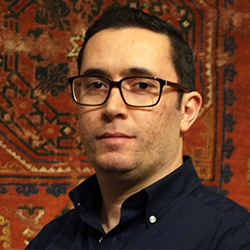 Khaled Hiatlih is specialized in cultural heritage documentation using modern tech and leading many initiatives to digitize cultural properties and museum archives. He received his BA degree from Damascus University and from BYU University in the USA. As a staff member of the Directorate General of Antiquities and Museums (DGAM) in Damascus, Khaled worked on heritage projects across Syria, including the rehabilitation of the Folk Museum (Azem Palace) in Damascus and the documentation of Syrian mosaics, a joint project with the European Center for Byzantine and Post-Byzantine monuments.

Dedicated to the preservation of Syrian cultural heritage, Hiatlih has been tracking the illicit trafficking of Syrian archaeological artifacts and documenting the damage to Syrian heritage since the crisis started. Since his arrival in the Netherlands, Hiatlih has participated in cultural initiatives to raise public awareness and protect endangered Syrian heritage as a part of global human heritage.

With the Institute for Digital Archaeology (Oxford) Khaled explores the potential of new technologies to preserve and reconstruct archaeological heritage. He participates in cultural initiatives with Leiden University, ASOR, IDA, Cultural Heritage Center, and UNESCO.